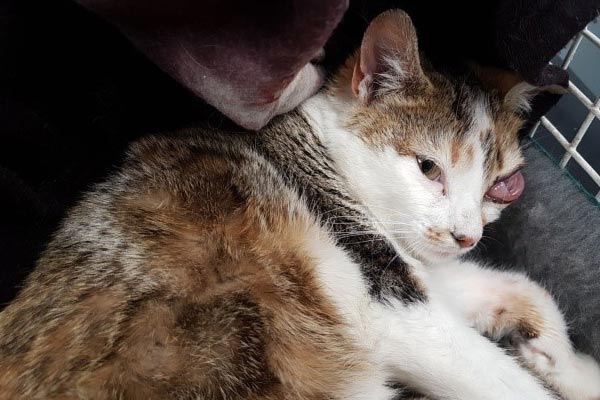 We were alerted by a member of the public about a heavily pregnant cat with a very poorly eye. At this point, we didn’t have an idea as to how severe her ‘poorly eye’ was. That was late night on the 12th of April. On the 13th we lend this person a trap and April was trapped overnight.

We picked her up in the morning on the 14th and took her straight to the vets as an emergency to have her checked out. Whilst waiting to be seen, little squeaks started coming out of the covered trap. April had given birth. The vet checked her and although the state the eye was in was horrendous, it was decided, for the welfare of the kittens (there was only 1 at this point) that surgery will have to be postponed as much as possible.

April was kept at the vets overnight to ensure she was ok. She gave birth to 3 kittens in total, but one of them was born with an extremely severe cleft palate and died within hours of being born. We brought April and the 2 remaining kittens home the following day. 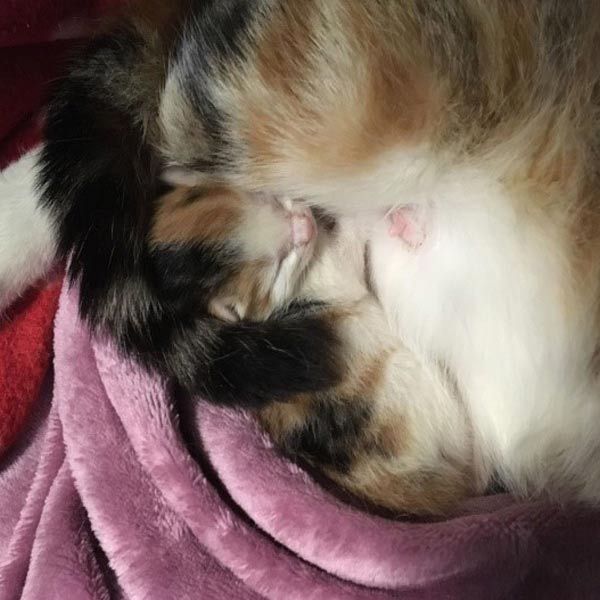 The vets prescribed an eye cream that was safe to apply whilst she was breastfeeding to make her as comfortable as possible and we applied it daily as instructed. April never once stopped purring.

We named the kittens Apollo and Aphrodite. The three of them seem to be strong and healthy (apart from April’s eye) but on the 19th, at not even 5 full days old, Apollo just faded away and died in his sleep. Needless to say we were heartbroken. On the 20th, April had to be admitted for surgery as the situation with the eye went from stable to critical in a matter of hours. Aphrodite of course went with her so she could be with her mum as much as possible. April was stabilised overnight and had her surgery on Saturday. Both came back to us on Sunday 22nd.

They were both amazing, April ate so much, and we were more than happy to keep putting chicken down for her! She devoured it!! On the 25th, we woke up to a slightly cold Aphrodite… we took her to the vets but she sadly her condition worsened and she passed away after lunch time despite the best efforts of the vet nurses looking after her. We were all distraught.

April came back to us and she clearly was missing Aphrodite, she kept looking for her and it was completely heartbreaking to see. We nursed her and look after her as much as she needed, tried to keep her busy and playing with her, but she wasn’t in a very playful mood. She was just exhausted. In under 11 days, she had been trapped, given birth to and lost 3 kittens and had a very intrusive surgical procedure… and 4 days after losing Aphrodite she started being in heat… that lasted for about 10 days. At the end of being in heat, she started to seem a lot better, both physically and psychologically. We still gave her lots of love and all the attention she needed and she started really showing her lovely personality.

She’s a really loving cat, but she does not like any of the other cats, she was petrified of them!! We kept trying to find her a home but we didn’t manage to find anything suitable for her. On the 22nd of May, after a lot of deliberation, she got sent to Battersea, who had taken many cats in our care previously and managed to find homes for them really quickly.

After letting her settle and ensuring she was alright and ready, she was advertised for adoption on the website. On the 11th of June, she was announced as Reserved and today her status has changed to rehomed.

We cannot thank Wetnose Animal Aid enough for your donation towards her care. 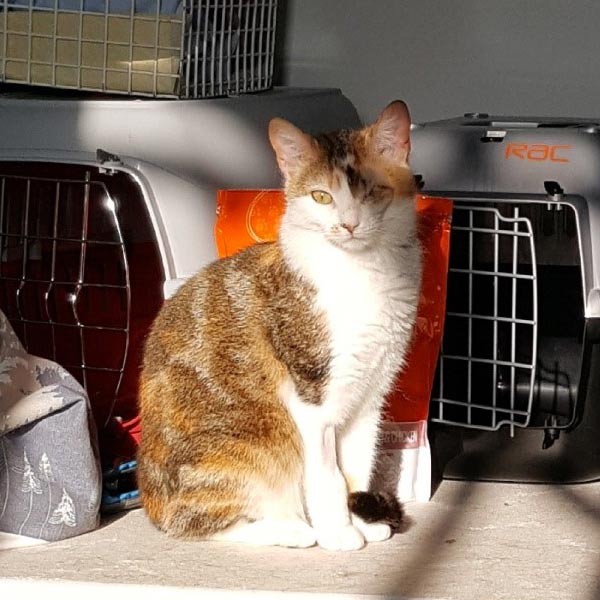