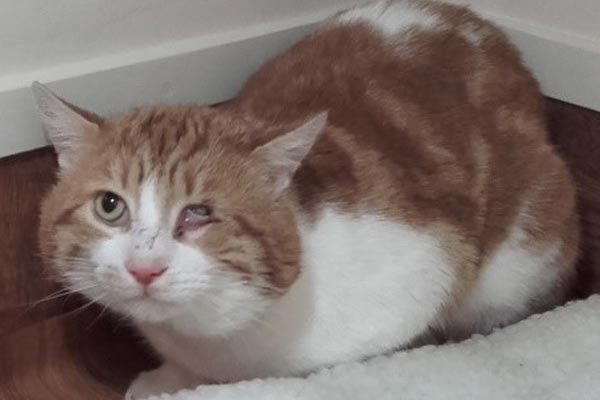 Ben was living outside a house with some other cats. The owner died and the cats were left to fend for themselves. A neighbour managed to catch Ben and the other 2.

All 3 were very scared and you could not really get near them. Ben was an entire male and had a very bad eye injury which was very difficult to treat because he didn’t like to be handled.

He also tested positive to FIV. The vets advised that he needed to have the eye removed. Ben’s operation went well and we moved him to one of our isolation pens. Once in there we spent a lot of time with him – eventually he would allow us to gently stroke him. Over time his eye removal healed well and also he slowly began to enjoy a fuss. After 2 months we decided to move him to our FIV pen where we have about 12 other FIV positive cats.

Ben fitted in well and soon became a real favourite in there. There is a really happy ending to this as Ben was adopted just last month and has settled really well and they love him to bits. So from a badly injured, scared, not being able to handled, FIV positive entire male cat – we now have a gorgeous, super friendly cat who just loves fuss and attention. And what of his 2 friends – well Snowey & Ginger who also needed a lot of TLC are now living in a home together and are both enjoying a lot of fuss.

Ben, Snowey & Ginger would have been classed as feral by some people but they weren’t. They were scared and just needed to learn to trust us humans again. So thanks to Venture Farm a happy ending for all 3 cats.”