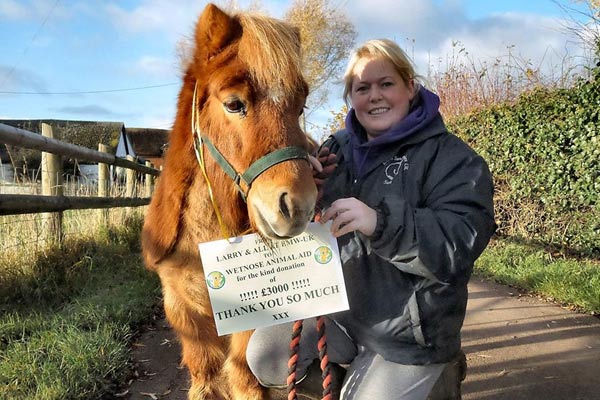 Larry is an odd little gelding, neither is he a mini Shetland nor a standard size, he falls somewhere between the two but is a stocky and a sturdy dear little chap who has been with us since late autumn of 2007.

Larry, on intake was then aged around 11 years. He came to this charity along with another little Shetland colt foal; both had been living awful lives prior to being removed. They both first went to our Wales sanctuary for immediate safety but very quickly were moved to our Herefordshire yard.

The little colt went out on loan as we had a super home waiting for him and was gelded when he was ready, in his loan home, where he has remained ever since but with Larry it was clear that he wouldn’t be placed on loan very quickly as he was full of fear, terrified of human touch, and unable to cope with more than one to one contact and even that was a fearful experience for him.

On arrival at our sanctuary yard he immediately suffered an alarming choke episode but despite all ways of trying to calm Larry our vet was unable to help at all; such was the fear this pony displayed. All we were able to do was to massage his throat area, try to keep him calm and hope he recovered – he did and has never suffered choke since. On intake we also noted that he had suffered a bad laminitis bout in his recent past which, although we didn’t know it at the time, would impact upon him throughout the years ahead despite everything possible that we could do to try to stop it happening. He is managed very carefully.

We have mooted the idea that Larry may possibly be one of the ponies who suffer from dwarfism in a mild way as his joints, especially his knees but also his hocks, are not quite as they should be and he does have a few other slight traits of this syndrome. Despite all these issues Larry is not in pain and is happy in his life, especially since the arrival of his now best friend Eric, who came to sanctuary as a very scared little colt of 5 months old. Larry loves Eric and Eric loves Larry, a real little bonded pair and a pleasure to have on the yard.

When we delved into the scant history we could find on Larry we found out that he had suffered while being tethered and had been seen to be tormented by kids with dogs so it’s no wonder he is was, and sometimes still is, worried by life. These days he is an older gentleman in his early 20’s and lives a very settled life but we do have to be very careful with his nutrition and his joint care. Larry will never leave the care of the sanctuary and is supported for life by this charity as his needs and lifestyle are not suitable for him to go out on life loan especially as he enters his golden years.

Ponies like Larry are always in need of our care, that care is dependent upon kind donations, which makes us so grateful to Wetnose Animal Aid for such a generous donation, of £3000 just received, allowing us to offer sanctuary to others in need and to care for those already here. Thank you so very much from us all.