VANDALS RELEASE DOGS IN A VICIOUS ATTACK AGAINST A MAN WHO HAS DEVOTED HIS LIFE TO HELPING ANIMALS IN ROMANIA! 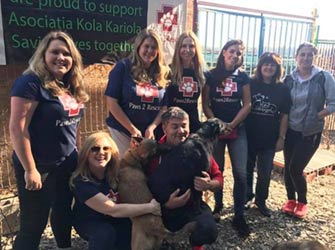 Emergency help needed: Wetnose Animal Aid has just returned from Romania alongside Paws 2 Rescue who we support, and as many of you know I have been 4 times before and know Marius and his wife Elena and the fantastic work he has done over the last 3 years, to me he is the Romanian Dog Whisperer.

On the Sunday night some vandals broke in to the kennels of Marius who owns the Kola Kariola Rescue shelter near Bucharest. Vandals tore down the back fence where the farm animals were and released a few dogs that then attacked a goat that was trying to protect her baby; several animals were badly mauled, we saw all the blood the next day!

Marius has staff that live on site but 2 were at a wedding that evening, there was only one person there that night but he didn’t hear any noise as it was right at the very back of the long kennels.

Early the next day (7am) we went straight to the city vets and saw another poor goat who had about 50 bites all over his back legs and back, he was shaking like a leaf in shock, just after we left we believe this goat had a heart attack and died.

We are appealing to our wonderful Wetnose supporters to give a donation by paypal REF: Paws to help Marius get better security, cameras and alarms and for better fencing urgently!